The famous couple Beyoncé and Jay-Z were recently spotted aboard the 95m superyacht Kismet. Having decided to take a short break during the world tour called On The Run II, the couple, accompanied by three children, spent several days traveling along the western coast of Italy, writes the Daily Mail. Superyacht Kismet was seen in the ports of Ponza, Capri, and Solerno. 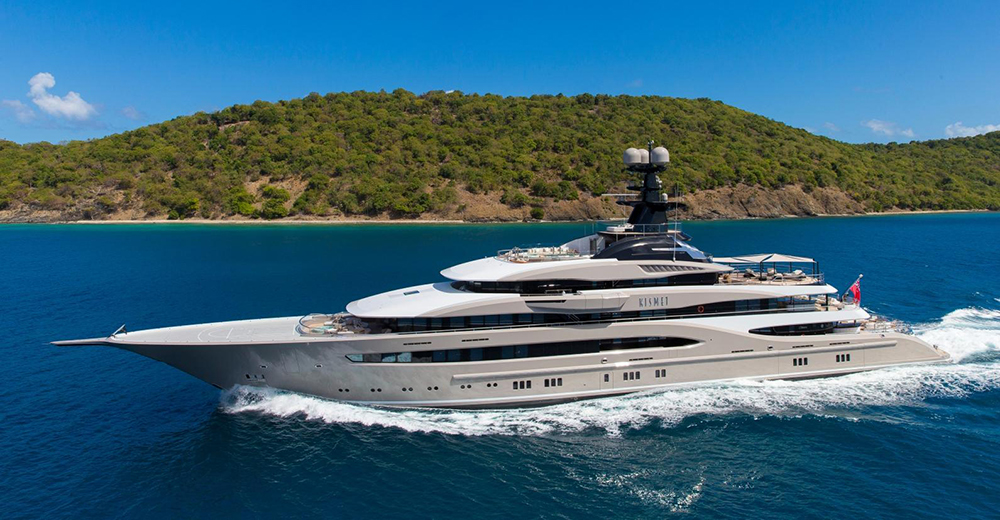 Kismet was built in 2014 by the Lürssen shipyard for Shahid Khan, the billionaire owner of Fulham and Jacksonville Jaguars football clubs. Onboard it can comfortably accommodate up to 12 guests and 28 crew members. 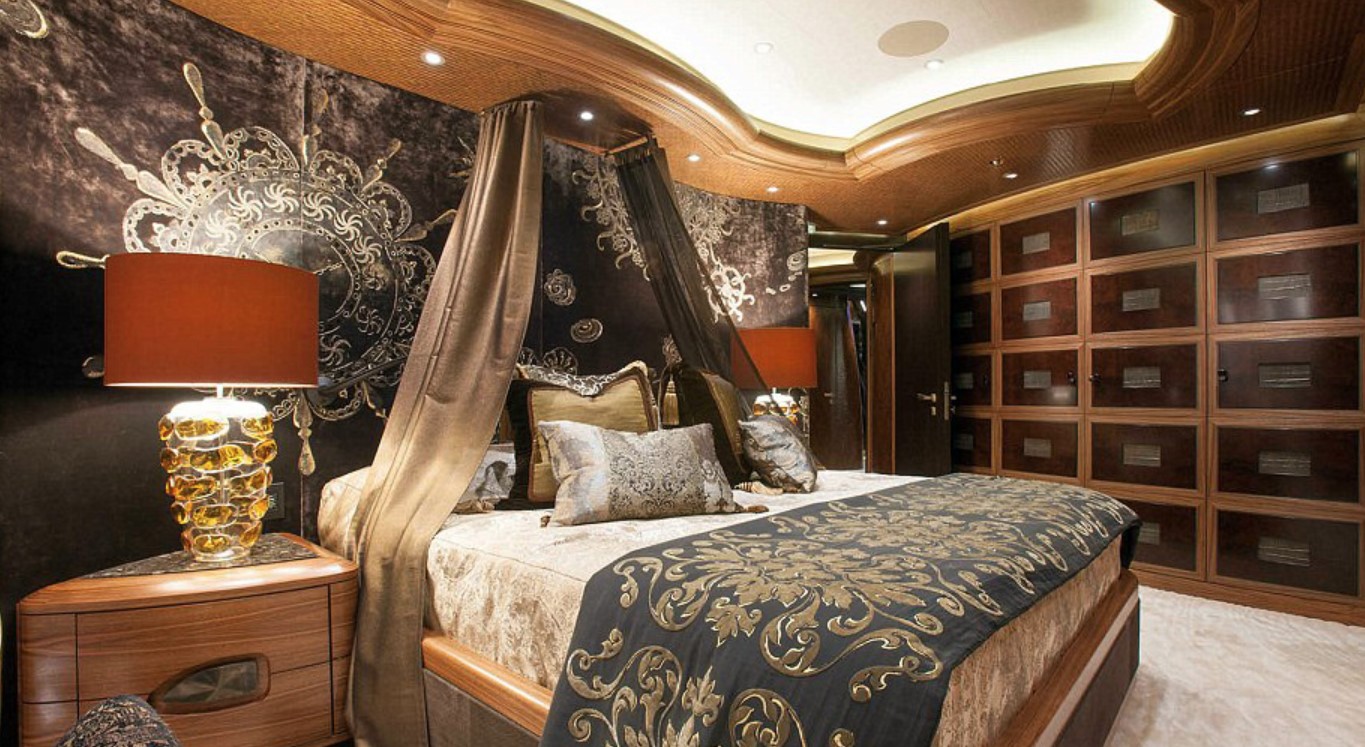 The chic art deco interior design of the yacht was created with the participation of the studio Reymond Langton Design. The yacht’s space is well planned, the result is 8 spacious cabins, a large salon with a piano, several cocktail lounges, and bars, a gym and spa areas. In the open part of the yacht, there is a swimming pool, a jacuzzi, a fire pit on the upper promenade deck, a semi-shaded lounge for sunbathing.

It is worth noting that Kismet is currently one of the most expensive yachts available for charter in the world.

In June of this year, American movie star Melanie Griffith embarked on a Mediterranean cruise aboard the 52-meter superyacht Addiction. On a cruise with stops in Monaco, Corsica, and Sardinia, Griffith was accompanied by a group of close friends, one of whose favorite pastimes was scuba diving with dolphins.

Having retired from professional basketball, the famous Magic Johnson spends the summer cruising the Mediterranean almost every year. Last year he chose the 74m superyacht Siren. On the trip, the super player was accompanied by his wife and three children, as well as a close friend, famous actor Samuel L. Jackson and his family. 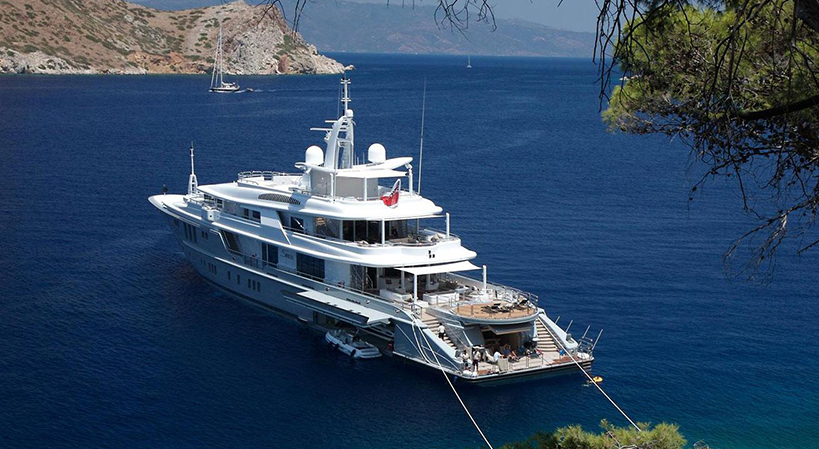 Yacht Siren was built in 2008 at the Nobiskrug shipyard. Onboard there is a cozy cinema, an extraordinary main cabin with a retractable hinged balcony, a spa area, and a gym. For the convenience of guests, the crew always includes a personal trainer, massage therapist, and cosmetologist. The boat’s open space is so vast that it boasts its own helipad, jacuzzi, outdoor cinema, and a range of lounges and dining areas. Incidentally, Johnson spent a full six weeks of summer vacation in 2015 aboard the 70-meter Felix (formerly known as Amadeus).

Last July, Leonardo DiCaprio was spotted aboard the 50m superyacht Impromptu, surrounded by friends Tobey Maguire and Kevin Connelly. Apparently, Leo was having a great time, enjoying the rays of the gentle sun with a glass of wine in a relaxed atmosphere. 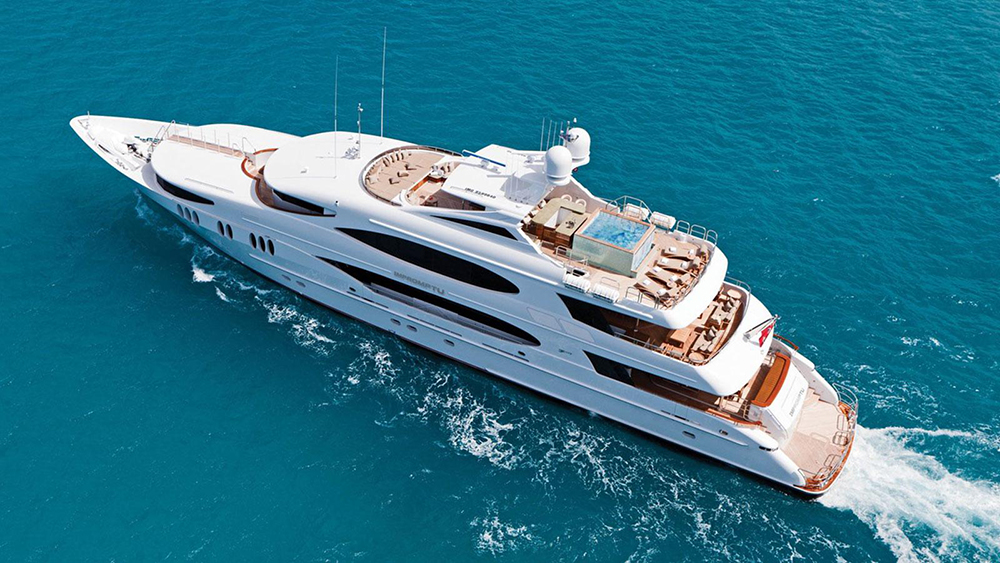 Superyacht Impromptu (formerly Mia Elise) has six luxurious cabins for 12 guests onboard, as well as a sky lounge, wine cellar, and a bar with a gaming table. The upper deck features a jacuzzi surrounded by sofas and sun loungers. Superyacht Impromptu was built by Trinity Yachts in 2010 and was completely refitted in 2016.

The 49-meter Highlander superyacht is one of the most famous in the world. It was not the size and entertainment onboard that brought fame to it, but the number of celebrities who visited it. Originally built for Malcolm Forbes, the yacht has met hundreds of celebrities at various times, including actors, rock singers, politicians, and presidents.

The Highlander was visited by President Ronald Reagan, Margaret Thatcher, Prince Charles, Paul McCartney, Mick Jagger, Liz Taylor, Robert DeNiro, and many others. In the summer of 2014, Chris Brown was resting on the Highlander in the port of Saint Tropez with a group of friends. 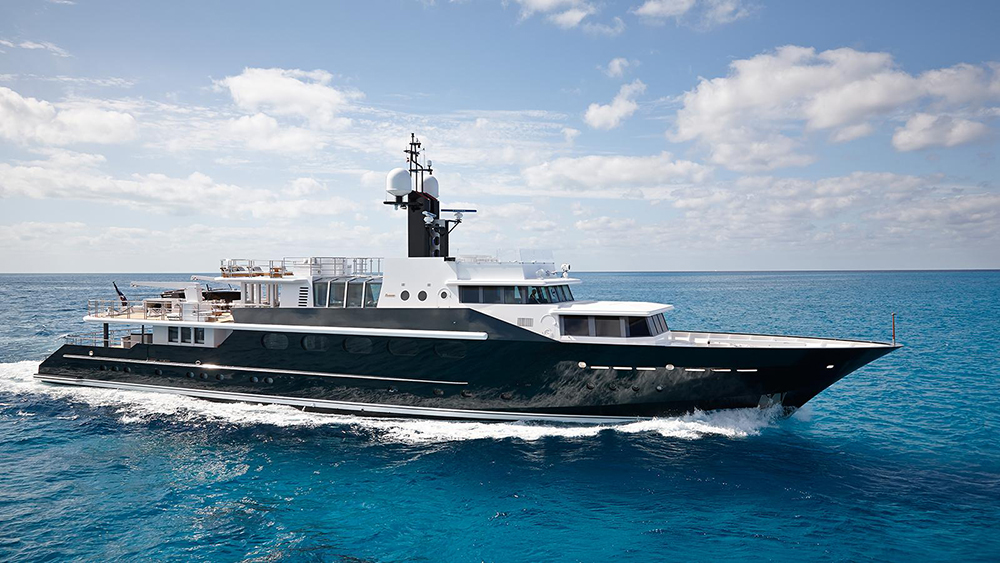 Superyacht Highlander was built by Feadship back in 1986. In 2014, the yacht has undergone significant changes. During a complete renovation, she received a helipad, a Jacuzzi on the upper deck, and stabilizers for pitching at zero speed. On the lower decks of the yacht, there are several outdoor dining and lounge areas, as well as cocktail bars.

The yacht can accommodate up to 12 people in seven cabins. It features a multi-colored sky lounge with comfortable sofas and a champagne bar and an equally chic main salon. The décor of the yacht actively used elements of wood and marble, from which a staircase is made, leading to a spacious living room with a large TV.

Two years ago, the famous British singer and composer Ellie Golding, who was vacationing in Saint-Tropez aboard the 77-meter superyacht Silver Fast, got into the photographs of the photographers.

Built-in 2015 by Silver Yachts, Silver Fast has already hosted celebrities on board. In particular, it hosted a dinner for honorary participants of the Monaco Yacht Show. 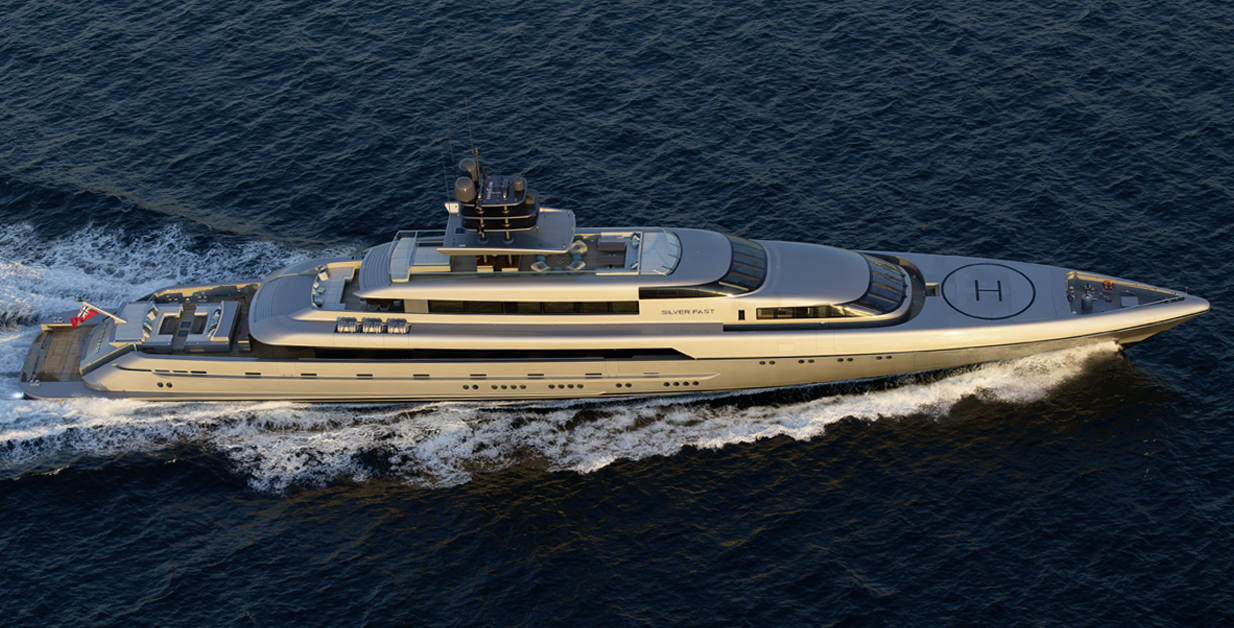 The superyacht’s stunning exterior was designed by Espen Oino. At the moment, the yacht is the largest motor ship in the world with an aluminum hull. Onboard, there is a helipad, a bar, numerous lounge areas, and a Jacuzzi for 8 people.

The interior is distinguished by modern features and the unique layout of the space. The lower deck houses a cinema, gymnasium, dining rooms, spa and sauna, massage room, and beauty parlor. The 8 cabins can comfortably accommodate up to 12 guests.

Lindsay Lohan is known all over the world for her craving for fun and luxury yachting vacations. She was spotted aboard several yachts last summer, including aboard the 45m superyacht Fathom during the Cannes Film Festival. 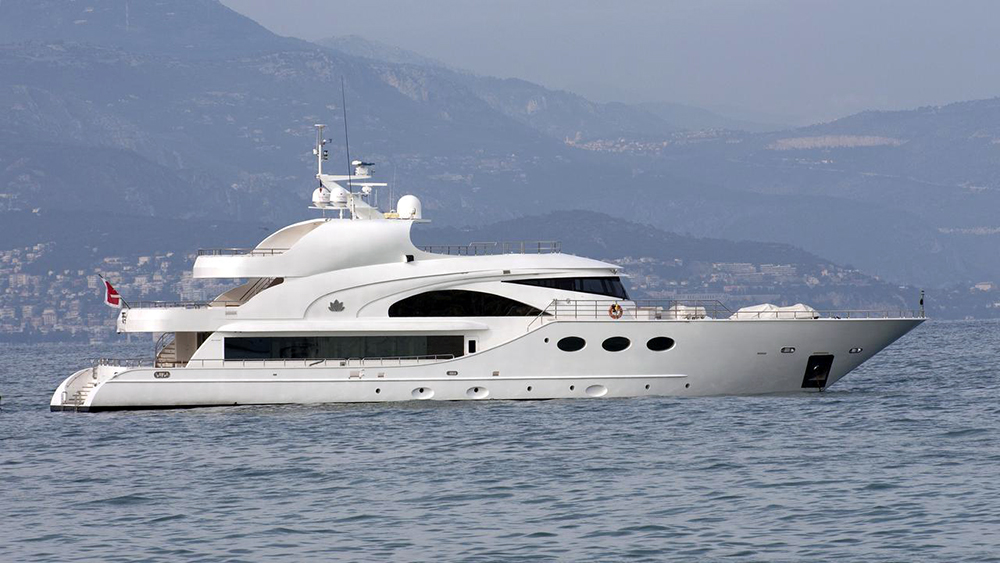 Fathom features a unique interior, designed by Zeff Design under the direction of Mark Zeff, which uses a variety of teak elements.

On the upper deck of the yacht, there is a large gym with exercise machines, barbells, and dumbbells. At the bottom, there is a hangar with stand-up equipment, towed water toys, and jet skis.

Naomi Campbell is a frequent guest on superyachts. However, her favorite is still the Benetti yacht Galaxy. Rihanna, Jay-Z, and Beyoncé have visited the 56-meter vessel at various times. 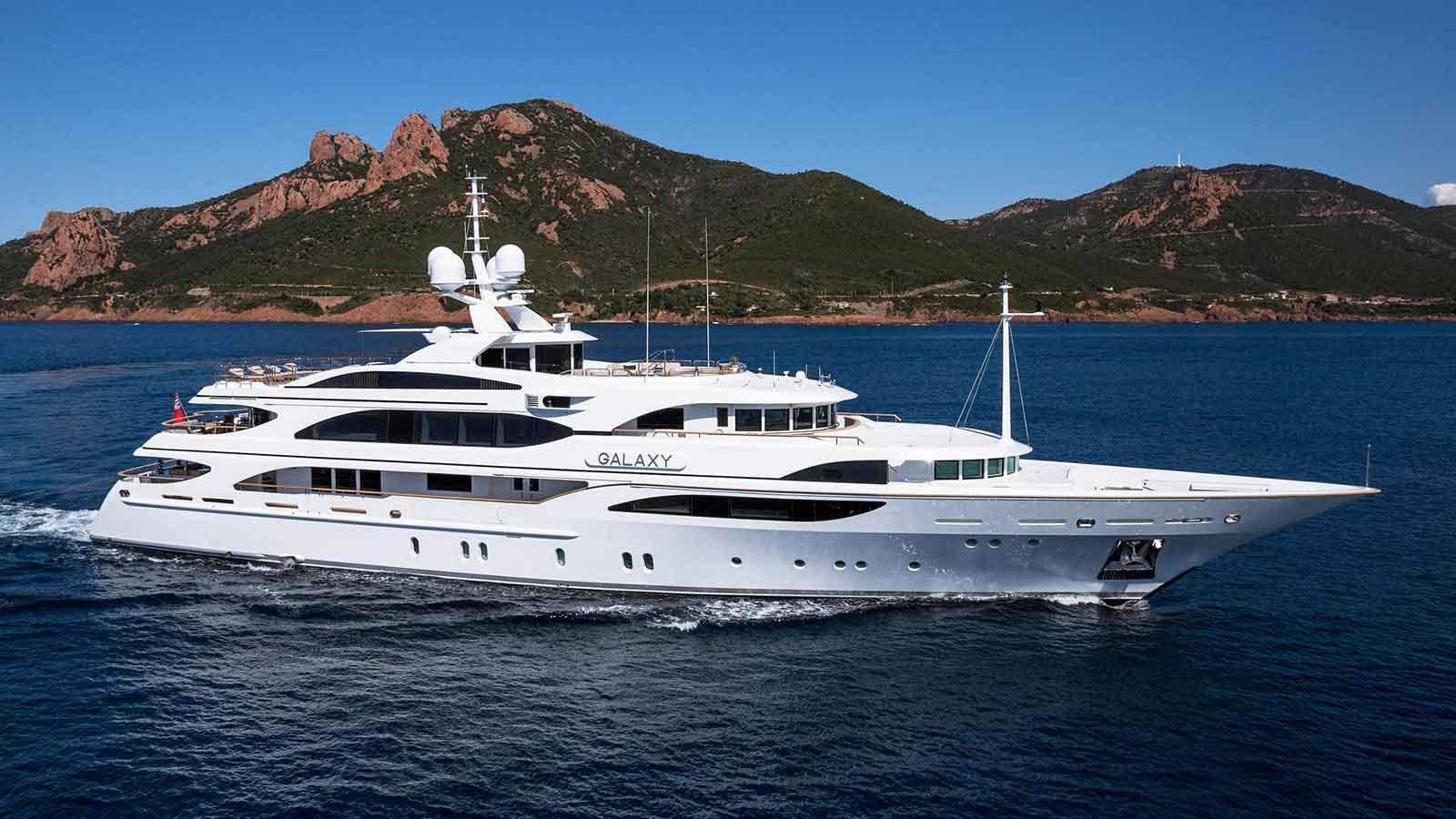 The reason this vessel is so often chosen by celebrities lies in the chic interior. For example, in the main cabin hangs the original work of Andy Warhol, in the elevator hall – the work of David LaChapelle in the style of Pop Art, as well as several works by Jean-Michel Basquiat.

In 2014, Galaxy underwent a major renovation, during which 6 cabins were added to it for 12 guests.