Italy is not famous for the sea alone! In fact, there is everything you want in this region. But the most picturesque and amazing places are not waiting for you on the Mediterranean coast … If you don’t believe it, then pay attention to where world-class stars like to rest. Did you know that Hollywood actor George Clooney, having celebrated his wedding in Venice, went with his wife to his estate on Lake Como? The small town of Laglio was no different from other settlements on the lake. But in 2002, actor and director George Clooney bought a house here, and now the city has become famous throughout the world.

Villa Oleandra was named after the tall trees of the same name that grow here by the road. Once the estate belonged to the famous Vitali family, and now the Hollywood couple George Clooney and Amal Alamuddin are resting here. 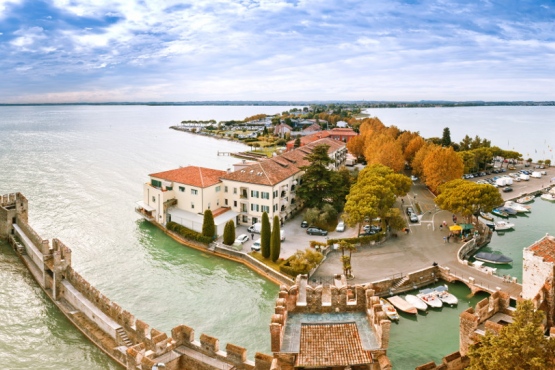 And recently it was reported that the Beckham couple is also eyeing real estate in Laglio. So there will be one more star pair.

Celebrities love Como for its elegance and luxury. On the southern shore of the lake, you can see the walls of the old quarters, small narrow streets, and cafes with open verandas.

Another lake, no less popular among the stars, is Garda. It is the largest in Italy and has different shores. In the south, for example, it is surrounded by hills, and in the north – by steep cliffs and small villages, as if “huddled” above the precipice itself. 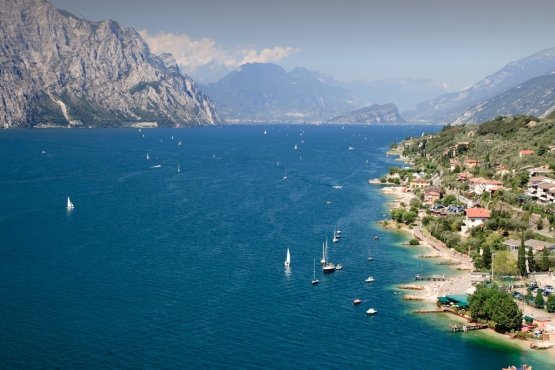 By the way, on one of the capes, facing far right into the lake, the spa resort of Sirmione is located, around which the ancient fortress walls are lined up. A little further – the Bardolino resort, which is called the birthplace of local red wine.

It is on Lake Garda that lovers of active recreation will find something to do. Canoeing and kitesurfing are more common in the north of Lake Garda.

The Scaliger Fortress, the Church of St. Anne, and the Villa Maria Callas in Sirmione – all this you can see in this country.

Lake Maggiore is not just a lake that you read about in one of the travel guides about Italy or a popular holiday destination for the stars. This is the area that the great French writer Stendhal liked:

“If you have a heart and a shirt, sell the shirt and visit the vicinity of Lake Maggiore … What can you say about Lake Maggiore, or the Borromean Islands, or Lake Como, you can only feel sorry for those who do not go crazy with them.” …

There are mountains around the lake that protect from strong winds, so the climate in this region is especially mild. The lake became popular among the European nobility after the opening of the Simplon Tunnel between Italy and Switzerland at the beginning of the 20th century. And in our time, resorts on these shores attract both ordinary tourists and stars.

One of the most exciting tourist towns in Maggiore in Stresa. These are not only old streets and small squares, but also the Borromean Islands, consisting of the islands of Madre, Bella, and Pescatori.

On the island of fishermen (Pescatori) you can explore the palace and park of the Borromeo family (17th century). The palace was built in the era of Louis XIV, and here you can clearly feel the influence of the architectural style of Versailles. The grandeur of the palace and the terraces of the park amaze the imagination.

Another of the most popular lakes in Italy is Iseo. There are excellent conditions for cyclists and hiking fans. You will appreciate the beauty of this area because the lake is located between the Lombard Alps. In the area of ​​the lake, there are about 20 settlements, which can easily be bypassed by car in a day or two. But there you will really feel peace and quiet because this is the least “populated” lake by tourists.

Greece – the Choice of the Gods of Olympus and Hollywood!

To restore … historical truth – Greece is not only the country of frappe, which the Greeks enjoy while…

Do you want to know how your favorite actor or musician lives, on which couch he is used to…

The Best Resorts Where Celebrities Love to Relax

Which resorts are most popular with celebrities? In the summer, many tend to go away from the stuffy city…

For the rich and famous, the entire globe turns into one big resort. It is enough just to want,…

Do you believe in astrology? However, even if you do not believe in the magical abilities of heavenly stars,…

The Most Expensive Places Where Celebrities Rest

Here is a list of addresses where you can easily meet billionaires, oligarchs, Hollywood stars, and show business. And…

10 Hotels in the Maldives, Where Celebrities Rest

The stars are also looking forward to the next vacation, and for this, they do not regret their honestly…