If you have always dreamed of meeting a star of the first magnitude and visiting Los Angeles along the way, we will help you fulfill this mission.

The world of modern media is arranged in such a way that almost everyone knows world-famous celebrities. The stars of sports, screen, politics, stage, TV broadcasts look at us from numerous covers of magazines and newspapers, shop windows, billboards, talk to us on radio and TV. Surprisingly, almost every one of us, having met a media person once in real life, seeks, if not “to touch a dream,” then at least to take a picture of it as a souvenir, then post it on Facebook.

Stick to our proposed plan carefully, and a photo of George Clooney hugging you might brighten your hallway.

We must say right away that the stars are the stars in order to avoid undue attention. And it’s not for nothing that glossy magazines spend so much money on professional paparazzi who specifically hunt down celebrities. However, the inhabitants of heaven are also people and visit a variety of places. Plus, the mentality of Americans is a little different from ours – they are more sociable and open, including celebrities.

If, nevertheless, thanks to our advice, you are lucky and you see how Brad Pitt feeds an omelet to his child in a cafe, behave with dignity. Do not fuss, wait until he finishes, introduce yourself, be sure to say that you are from afar, and ask permission to take a picture. Most likely, you will not be denied.

So, the iPhone is ready, it’s time to go – in search of the beauty Paris Hilton and the brutal Bruce Willis. 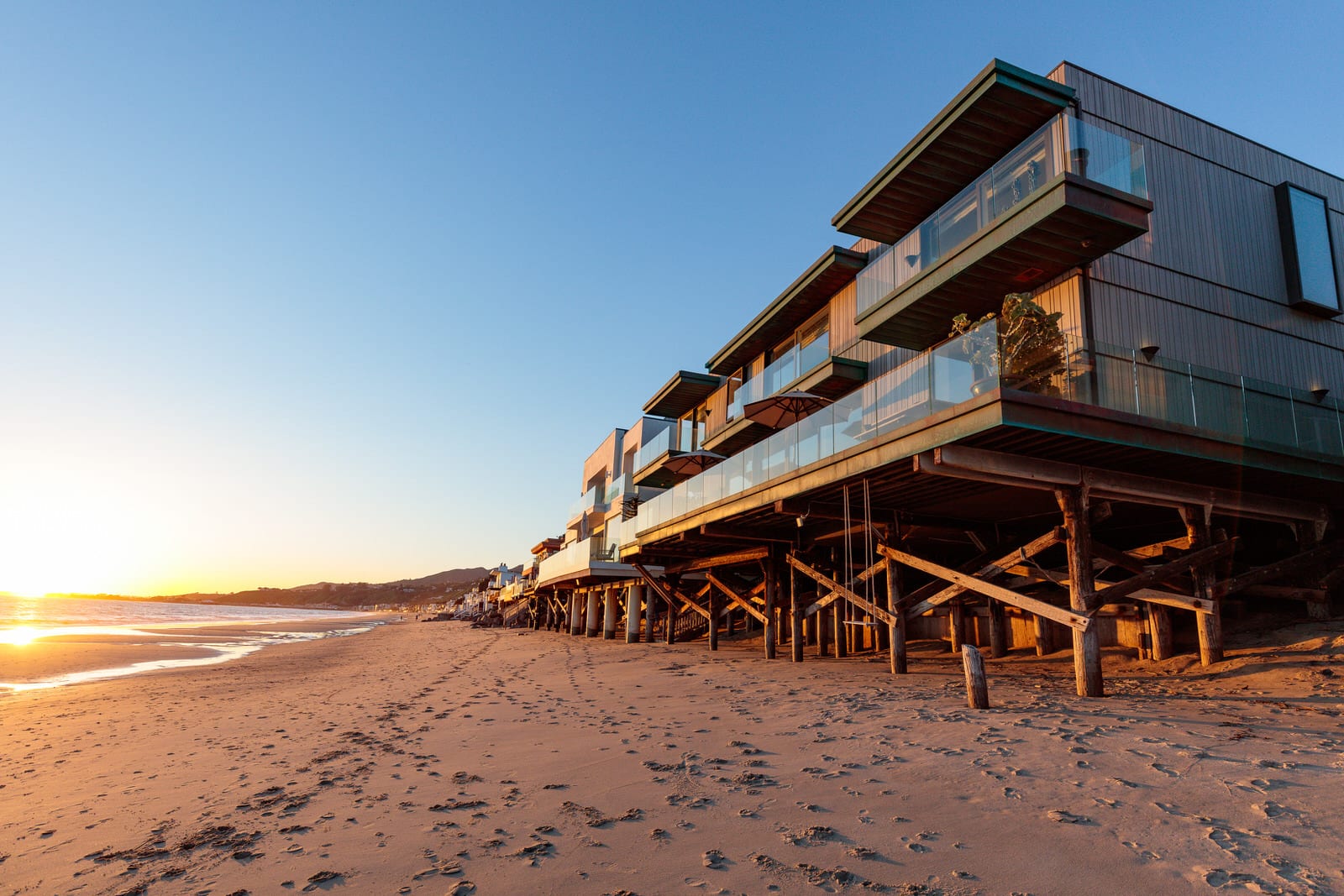 Many kilometers of sandy beaches, stunning relief, remoteness from the center of the city bustle of Los Angeles and surprisingly mild climate attracted not only the Spanish discoverer Juan Rodriguez Cabrillo, who first landed here in the distant 1542, but also the most recognizable stars of our time. Today Malibu is the city with the highest percentage of resident celebrities per thousand inhabitants in the world.

Get up before dawn, grab a surfboard and wait for the wave around Malibu Pier from 6 am to 8 am. Alternatively, jogging along the surf and meditating on the beach with the first rays of the sun is a good idea. This is what Will Smith, Jason Statham, Mel Gibson, Ryan Phillippe, Linda Hamilton, Pink and many other famous people who live in first-class houses along the ocean line do regularly here. The territory of the beaches is completely public, so no fences and barriers will stop you.

The fashion for a healthy diet, which has long swept California, with products grown without the use of GMOs and chemical fertilizers, naturally, did not bypass the stellar representatives of humanity. Whole Foods, the largest premium supermarket chain offering a full range of organic food, has become a favorite grocery store for celebrities. Most likely to bump into a fresh avocado table with Jessica Simpson, Holly Barry or someone from the Lakers is Whole Foods in Venice, as this is the last such store before entering Malibu on the Pacific Highway (the famous Highway 1).

What star doesn’t like to look at other stars and show themselves? Perhaps the surest way to drop a hot dog on Jack Nicholson or spill a beer on Bill Murray is to buy ground tickets to one of the Lakers or Clippers’ home basketball games. Despite the abundance of VIP boxes, many stars like to sit in the forefront of the crowd. True, the ticket price, reaching several thousand dollars per game, during play-off matches can scare away many, but what can’t you do for the sake of a unique photo with your favorite star! 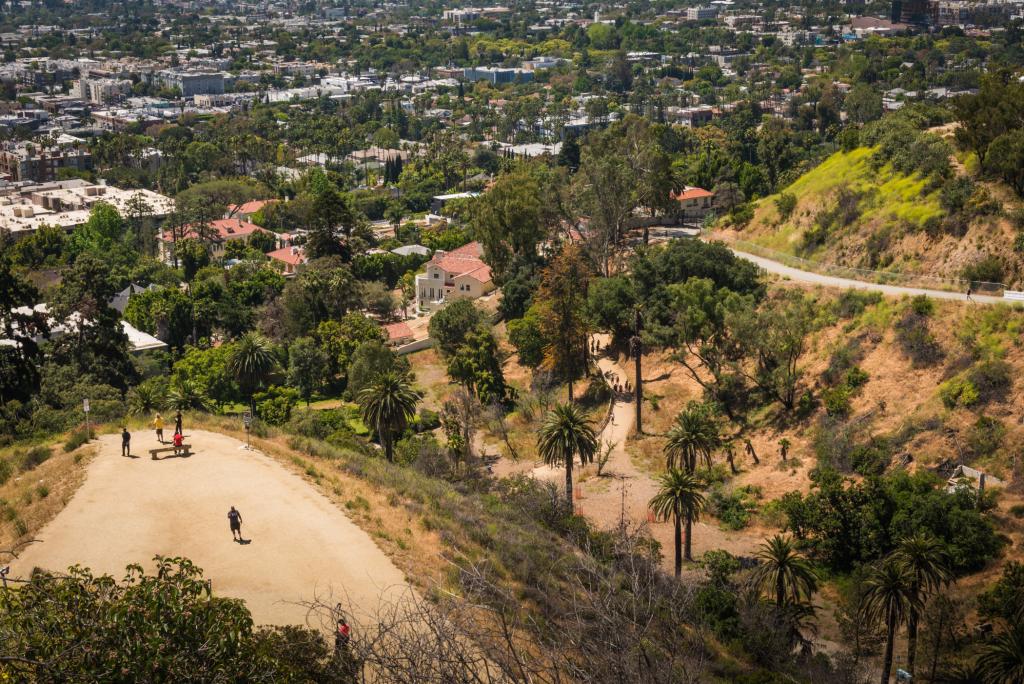 Hicking is an American-style hike. This is when the car is in the parking lot at the entrance to the park, sandwiches in a backpack, and special bins for barbecue coals everywhere. No adrenaline, like getting lost, being eaten by wild animals, or starving to death, like in the Siberian taiga … But great views, beautiful nature, and a helicopter in case of emergency (like overwork or dehydration).

Runyon Canyon Park, located in the Hollywood Hills, 10 minutes drive from Beverly Hills, is a favorite of celebrities for family picnics and small bike and hiking trips with their equally stellar kids. So do not forget to take your offspring – what if they become friends?

Shopping on Rodeo Drive, a luxury boutique street in the heart of Beverly Hills, is just as much a stress-relieving remedy for top stars. Equip yourself with a platinum credit card with an extended credit line and plunge into a world of luxury and endless fittings while waiting for Julia Roberts and Michelle Pfeiffer.

This is one of the leading beauty salons in Los Angeles, located in the Hollywood area. Founded by the charming Faith Tatro, a renowned skincare specialist, Touch of Faith has become a real Mecca for celebrity women. Proprietary care technology using exclusive formulas is expensive enough to increase the likelihood of your meeting with a celebrity.

Each of them is interesting in its own way, plus several new places always open in the new season. By the way, the prices in these establishments will pleasantly surprise the regulars of gourmet restaurants. Even in the most expensive restaurant, it is difficult to find a hot dish more expensive than $ 70-80. However, our goal is not only delicious food but also the need to be within arm’s reach of Ashton Kutcher, Justin Timberlake, and Cameron Diaz.

This season, perhaps, the Italian restaurant of the famous chef Edoardo Baldi is best suited for this purpose. A small room creates an atmosphere of home comfort, which means that it increases your chances for a cherished photo because dropping a gravy boat under the next table is as easy as shelling pears! Exquisite Italian food and a gorgeous wine list will only help you cement your acquaintance. Don’t forget to pre-book!

As with restaurants, Los Angeles nightlife is just as diverse. However, based on the purpose of the visit, we are interested in a top-level club, but with a sufficiently democratic atmosphere so that the stars are not fenced off from ordinary visitors by impregnable VIP boxes with huge bodyguards. Drai`s is ideal for this – a small establishment located on the top floor of Hotel W. Great music, fresh air, an area with a pool and stars in the literal and figurative sense (the club has no roof). Paris Hilton, Britney Spears, Drew Barrymore, and other partygoers might catch your eye if you haven’t gotten overly tequila by now. Yes, and beware of doppelgangers – this is Los Angeles after all!

Elon Musk’s brainchild – a new generation electric sports car – quickly won the hearts of not only Silicon Valley millionaires, but also Hollywood stars. Chic design, state-of-the-art technologies, unique environmental friendliness, excellent image – all this has led to the fact that the line for a new Tesla car has been stretching for almost two years. In our case, one thing pleases – there are more stars who have not yet bought a car than those who have bought it. So it’s worth heading to Tesla Motors’ headquarters in Santa Monica. Perhaps, it is tomorrow that David Duchovny will buy himself a new car there, who has argued many times that, unlike the on-screen character of the Californication series, who drove a Porsche 911, he prefers bigger cars.

Well, perhaps the most reliable way to meet a celebrity is to have a cup of coffee with him (her) in the bar of the Private Jets Lounge while the star is waiting for his private jet to take off. The disadvantages are obvious: you will have to buy your own plane or borrow it from an oligarch friend. And then the question is: if you have your own plane, why do you need a photo with Beckham? Dream about something more impressive!